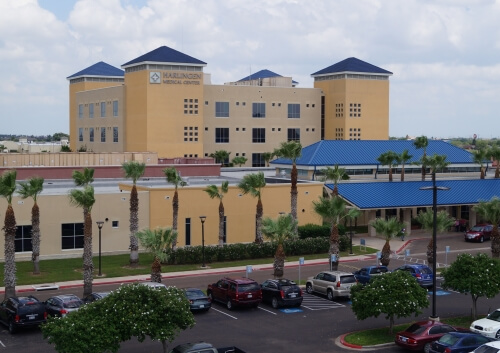 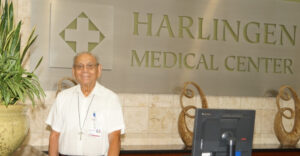 Harlingen – When a patient has to be in the hospital, their stay is made brighter by caring doctors, attentive nurses and other healthcare workers – and in some cases by a volunteer who will sing the patient’s favorite inspirational song.

At Harlingen Medical Center, Samuel De Corse is the “singing volunteer” who visits patients just to see who how they’re doing – or if the patient wishes to sing or pray.

“When I visit a patient’s room, I ask them if they like for me to sing a song for them – and if they and their family members would like to join me,” Mr. De Corse said. “I enjoy sharing God’s love to them through singing.”

Examples of spiritual songs that Mr. De Corse sings with his patients include “How Great Thou Art,” “Amazing Grace,” and “Be Not Afraid” – but he also takes requests.

“I always carry a song book with me,” he said. “I really enjoy singing whichever song the patient picks out.”

Mr. De Corse, a retired U.S. State Department employee, has been trained as a “pastoral services volunteer” who has been assisting Harlingen Medical Center Chaplain Jesus Reyes for the past four years in visiting patients at the hospital along the Expressway.

“I visit with the patients and families, and pray with them, if they wish to,” Mr. De Corse added. “It’s been a blessing for me as well. I’ve developed many good friendships because of this. It’s a privilege to share God’s blessings with them.”

Mr. De Corse, 80, visits patients regardless of their denomination, tailoring his prayers and songs for each person’s needs and preferences.

“When I give God’s blessings, I work with all people, regardless of which religion they are,” he said. “I’ve learned to respect all religions.”

If the patient is Catholic, Mr. De Corse is available to give them Communion if they wish, and on Ash Wednesday, he also helps distribute ashes to patients and visitors. He also brings small gifts, such as rosaries which are hand-made by local church parishioners, as well as pamphlets with the words of several prayers.

Mr. De Corse also sings at church, as he is a member of the choir at St. Anthony’s in Harlingen, as well as a lector (reader of passages from the Bible) and Eucharistic minister. Mr. De Corse estimates he puts in over 20 hours per week volunteering at two local hospitals as well as his participation at the church.

With all of that volunteer work, Mr. De Corse has become quite a conversationalist, able to chat or pray with 12 to 20 hospital patients on any given day, in either English or Spanish.

“I have a type of personality where I like to greet people and talk to them, and put them at ease,” he said.

But Mr. De Corse first started doing volunteer work not in the Valley, but in Mexico, where he was working for the U.S. Department of Agriculture to help eradicate the screwworm parasite in Mexican cattle. While working in the southern state of Chiapas, near the border with Guatemala, Mr. De Corse would drive for 30 minutes into the rural areas to do volunteer work with impoverished families.

“I helped teach religion classes to the children – and in turn I learned to appreciate their culture and religion,” he said.

Most of the people in that area lived in extreme poverty – and shared an ancestry background with Mr. De Corse, as they came from a Native American or “American Indian” background. Mr. De Corse was born on the Fort Yuma Indian Reservation in Arizona – and one of his great-great grandfathers (Chief Pascual) was the tribal chief of the Quechan Tribe.

The chief’s daughter, Luz Pascual, married Mr. De Corse’s great-grandfather, Dr. Albert De Corse, who later became the mayor of Yuma, as well as the physician at the Yuma Territorial Prison in Arizona.

Mr. De Corse followed in his great-grandfather’s footsteps somewhat, by also helping with healthcare for the Native American population while working for the U.S. Public Health Service in Phoenix, Arizona. He later became the first Native American to serve as a Regional Equal Employment Opportunity Officer, where he worked to secure training and education for Native Americans and to prevent discrimination again them in employment opportunities.

A veteran of the U.S. Army, Mr. De Corse served with the U.S. Army 2nd Infantry Division during the Korean War.

After the war, Mr. De Corse finished up his college education at San Diego State University – where one of his classmates, Raquel Tejada, later became a famous movie star and singer, Raquel Welch.

Mr. De Corse and his wife Silvia first came to the Valley in 1992, when he served as a Regional Management Analyst for the USDA in Brownsville.

“We were very happy here in the Valley, and decided to stay here after I retired from working with the government,” Mr. De Corse said. “We’ve been involved in a lot of church activities, as well as my volunteer work at the hospitals, which I plan to keep doing as long as I am able.”

Mr. De Corse is one of nine “pastoral service” or chaplain volunteers who help brighten the day of patients at Harlingen Medical Center by bringing them a smile, a word of hope and consolation. In addition, other volunteers at Harlingen Medical Center bring flowers and newspapers to the patients — while still others serve in various areas of the hospital, including the Emergency Room and the Finance, Human Resources and Marketing departments.

With April being National Volunteer Month, those interested in volunteering at Harlingen Medical Center are encouraged to call for more information at 956-365-1888, or visit www.HarlingenMedicalCenter.com/Services/Volunteer-Services.aspx.